What do You Want to Read About Today?

I said that when we moved to Texas, I was going to make the switch to all-grain brewing and upgrade my equipment, and I did- sort of. I had a full 3-tier system in mind when I said that, but limited storage in our apartment meant that I had to do something different. After a little bit of research, I opted for the Brew-In-A-Bag Method instead. All I needed was a big ass pot, a propane burner, mesh bag, and a paddle, so off to the store I went. This is when things got interesting. Anyone from the South knows that these items, minus the mesh bag, are also needed for crawfish and/or seafood boils. Crawfish season was already over when I was buying the stuff, so the guy in line behind me at the register got curious. The conversation went something like this:
Guy: "Whatcha cookin?
Me: "Beer"
Guy: *laughs*
Me: "Seriously, I homebrew"
Guy: "Oh, you can do that?"
Me, trying to pay and get out of the store: "Yup, it's fun. Have a nice day."

Next step was to go to the homebrew supply for the mesh bag and ingredients. It was August, so I was buying stuff for the 2nd edition of our anniversary brew, 9 Year Itch. This was my 1st visit to the (only) shop in my area. They had everything I needed, and it was a good experience so far, so I decided to ask for advice. My last regular shop was a great place to ask questions and get tips and they never made me feel stupid for asking, so why should this place be any different, right? HA!
Me: "This is my first try at BIAB, any tips for me?"
Store Employee: "Yeah, don't do it." (Really?!)
Me: "I have limited space, so this is pretty much my only option for all-grain right now."
Store Employee: "That's too bad. Your efficiency is going to be really low. I would suggest getting a mash tun as soon as you can."

Needless to say, I walked out of there a little disappointed. When I got home, I turned back to the good old Internet and homebrew forums and found a ton of pointers! (Not all HBS stores are created equal, my friends, but that's not the point of the story.) Flash forward to brew day. We decided to set up by the pool, which is close to our apartment, but far enough away to satisfy the 10-foot rule for open flames at the complex. August is HOT in Galveston, so as the day went on, lots of people
passed through the pool area. Almost every time, we ended up in a conversation similar to the one I had at the store: 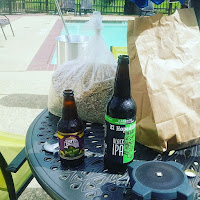 The brew session went well, and we made it to the waiting period. Now, 9 Year Itch is a big beer at an estimated 9% ABV, so I expected it to take some time. I didn't expect to learn a lesson about stuck fermentation. I check my numbers at 2 weeks and 3 weeks in before I bottle, just to make sure fermentation is over and my target has been reached. Well, after 4 weeks, my gravity readings were still the same as week 2, and way too high for the beer to be considered done. Back to the internet, and it was confirmed- fermentation was stalled, but there was a way to start it back up again! All I had to do was add more yeast, Saison yeast to be exact. This strain is a monster and will eat any fermentable sugar in the wort, even if conditions are less than perfect. 2 weeks after adding it to the carboy, my numbers were right where I needed them to be, and it was time to bottle. Well, due to the extra samples I took before I realized fermentation had stalled, as well as the extra trub  from the 2nd yeast addition, I lost about a gallon worth of beer. Did I factor this is when I was preparing the priming sugar? Of course not! In fact, I used extra because I wanted it to have the high carbonation levels characteristic of Belgian beers. Luckily, I didn't get any bottle bombs in the batch, but the majority of them were gushers. We have learned, and instructed everyone who got a bottle, to open the bottle over the sink and immediately pour it into the largest cup they could find (so much for proper glassware). I'm also lucky that none of these issues affected the taste in a bad way, there was just less of it to enjoy. The beer was still delicious, and we are down to our last few bottles.

The moral of the story: brewing comes with its share of challenges, but it's always worth it in the end. And that's why I love it.

Posted by Angelica at 10:16 AM
Email ThisBlogThis!Share to TwitterShare to FacebookShare to Pinterest
Labels: Brew Day Stories, Homebrewer Problems

If you came to this page expecting to find information on a hugely successful craft brewery, you're not in the right place . . . YET. I'm Angelica, and this blog is all about my adventures in homebrewing with a little smattering of educational posts and beer-related ramblings.
A fun little hobby that I started with my husband has quickly turned into an unexpected passion. I can talk about beer for days, so if you're as crazy about it as I am, you should have fun here (you might even learn a thing or 2). Grab a drink and enjoy!